Monday: You Make You
Tuesday: The Legal Profession Is Not For Everyone
Wednesday: Consider What’s Outside The Law
Thursday: Live Within Your Means
Friday: Make Yours a Small World 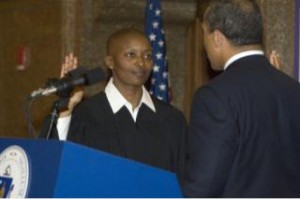 Last December, Massachusetts’s governor, Deval Patrick, swore in Shannon Frison as an Associate Justice of the Roxbury Division of the Boston Municipal Court, making her the youngest judge in commonwealth and the youngest ever to be appointed by a governor. Shannon’s pedigree—she matriculated at Harvard University before joining Georgetown’s law community–might make her recent judicial appointment seem preordained. To the contrary, Shannon’s rise was unconventional.

For starters, Shannon did not have any of the contacts that one gathers while vacationing on Martha’s Vineyard. Her summer home is in Mississippi where her mother, a single parent for most of Shannon’s childhood, now lives.

I grew up in a two-bedroom apartment on South Shore Drive on the South Side of Chicago.

A product of public schools, Shannon was valedictorian of the mostly black Hyde Park Career Academy, where a student was as likely to be involved in a carjacking as heading to college.

By the time Shannon arrived at Georgetown, she was there to fulfill a lifelong ambition to be a lawyer. Georgetown Law was attractive because of its state of the art facilities, location in the nation’s capital, and large faculty. In other words, Georgetown was a school that could give her the tools to make herself.

You can never say it is the school [that makes you]. The reputation of your school can open a door or two, but not much more than that, especially if you’re black. In fact, people at my level—judges or those known for being legal movers and shakers—are not from the Ivy League.

The law school you attended is useful in securing that first law firm job, but it doesn’t matter as much in other settings.

Shannon didn’t even bother cashing in on Big Law. While most of her classmates were trying to secure jobs with law firms or the Department of Justice’s Honor’s Program, Shannon went to Officer Candidates School and became an officer in the Marines.

The rest of Shannon’s story and video footage of her swearing in after the jump.

I wasn’t familiar with the Jag program, but during my first year at Georgetown there were a few marines in our class who did a bit of unofficial recruiting. I’d been thinking for sometime that I didn’t want a traditional legal job. Believe or not, I’d even taken the firefighters exam. I wanted something physical. I wanted to serve the country. I wanted to be in a leadership role.

After we graduated, Shannon did tours abroad in support of the Global War on Terror then settled into practice at Dwyer & Collora, LLP in Boston. Her close cropped blond fro stood out at the twenty-five attorney firm, where she was the only black associate. After a while, she and the firm grew apart.

I’d been at the firm for seven years and thought I was mentally and professional ready to make partner, but they wanted me to wait and prove myself more. I had done that enough. The ways you prove yourself in a firm are not always merit based or what you want to do. I felt stifled at that point. I was no longer growing and learning.

In addition to these concerns, her firm was moving away from the kind of work she was interested in doing.

The firm was moving to more civil work, they weren’t interested in what I call blue collar cases—rape, robbery, and murder.

But that work gave Shannon the greatest satisfaction, so when the opportunity presented itself, she went out on her own. She got the referral for what was to be the most sensational murder trial in Boston that year. Her client, Calvin Carnes, was accused of murdering four aspiring rappers at a makeshift recording studio. Shannon endured a four-week trial, which included physical threats, 65 witnesses, and 200 pieces of physical evidence. After nine days the jury was in. Her client was convicted but Shannon had impressed the Bar.  The Massachusetts Lawyers Weekly awarded her Attorney of the year.

Soon thereafter, she decided to apply for a judicial appointment. The lengthy application was followed by an interview with a 20-member committee. Then came rigorous background checks and an interview with Gov. Patrick. Finally, the Governor’s Council approved Shannon’s nomination and she was sworn in.

I’m tempted to say, the rest is history, but I think Shannon is just getting started.