Monday: You Make You
Tuesday: The Legal Profession Is Not For Everyone
Wednesday: Dream a New Dream
Thursday: Live Within Your Means
Friday: Make Yours a Small World

We don’t want nobody that nobody sent
-Judge Abner Mikva giving a lesson in Chicago politics to Barack Obama.

The story Judge Mikva told Barack Obama to highlight the cronyism in Chicago politics has been retold countless times as if this philosophy is unique to Chicago. In truth, it is a truism the world over. In DC the inquiry is made this way, “Now, how do I know you?” In the South, they ask, “Who your people?” On the East Coast they ask, “Where did you go to school?” In L.A., they simply ignore people they don’t know.

In a world where building contacts and making connections are a click away, I was surprised to discover that some of my classmates were hard to track down. Even when I knew where to find them, email replies and call returns were equally hard to come by. They seemed to not want to be found. 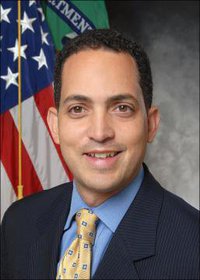 I did not find this to be the case with Don Graves. On his Facebook page, he provides three email addresses and his cell phone number. This is a man who understands the value of keeping in touch. And why shouldn’t he? As Director of Public Policy for the Business Roundtable, an association of chief executive officers of leading U.S. companies with nearly $6 trillion in annual revenues and more than 12 million employees, Don interacted with the most influential business men in the world, including then African American CEOs, Richard Parsons, E. Stanley O’Neal, and Kenneth Chenault.

In his present position as Deputy Assistant Secretary for Small Business, Community Development and Housing Policy at the U.S. Department of the Treasury, he is in the room when The President signs bills into laws. One doesn’t secure such a position by filling out an online application at USAJobs.gov.

To discern Don’s approach to career and business building, I read his statements in Congressional transcripts, New York Times articles, and his company bio. A three-prong principal emerged: Build networks. Nurture relationships. Forge partnerships.I first observed Don in action at Georgetown Law where he served as our Student Bar Association president. He has continued to stay in touch with, and, as evidenced by his responsiveness to me, make himself available to members of our class. He will, of course, be participating in our upcoming reunion weekend, which includes the Black Law Student Association Reunion Brunch. If past years are any indication, many former BLSA members will not be in attendance. When I suggested to one classmate that the brunch might be a good place for him to make connections that could lead to firm business, he dismissed me out of hand stating emphatically, “Nothing ever comes of that sort of thing.”

He was dead wrong.  The story Ernest Tuckett shared with me via email proves it.

I applied for the DuPont job in response to an ad.  A former co-worker from the firm works for DuPont, and she made inroads for me with my boss.  That helped, but didn’t kick the door open.  In February 2005, just before I applied for the job, I attended the GULC Black alumni conference.  There I met the GC of a client I’d done work for – a Black female lawyer and GULC grad, Marianne Niles of Washington Sports & Entertainment…When I introduced myself, she remembered me and the work I had done for her company…Months later, we met for lunch, and I told her in passing about the DuPont job.  It turns out that Stacey Mobley, DuPont’s GC at the time, and his wife are best friends with Ms. Niles and her husband. Less than 2 weeks later, I got a call to interview for the job, thanks to a kind email from Ms. Niles to Stacey about me.

To dispel the notion that this was a fluke, Ernest goes on:

There are many stories like this in my life and in my friends’ lives.  Networking is priceless – from getting clients, to making friends, to learning your craft, to finding resources to ask questions when in need, and for future referrals for clients and references for jobs.  I love to network even now that I’m in-house…I’m always on alert for the next possible opportunity, but I also like to connect people with like interests and to help other minority lawyers at firms meet potential clients and get business.

In networking, meeting people is the main goal.  All of the other end results come from making those connections.  Some of them take minutes; others take years. Also, remember that networking is a give and take exercise.  Seek to help others connect with the people they need, even those who seem to be further along than you, and the returns sometimes are even greater for you.