Monday: You Make You
Tuesday: The Legal Profession Is Not For Everyone
Wednesday: Dream a New Dream
Thursday: Live Within Your Means
Friday: Make Yours a Small World 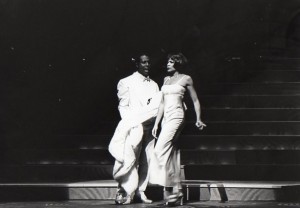 On a Saturday morning in May not long past, Oprah Winfrey said in her commencement address to a crowd at Howard University: “All you need to do is know who you are. And I know you know who you are. Because I have, as a part of my Harpo production team [1994 Howard graduate] Teri Mitchell…who came with me today.”

Not everyone can claim a shoutout from Oprah! But Teri, who just also happens to be a part of Georgetown Law Class of 1995, can. After graduating she took a job as an assistant at a news station. From there she did stints at “Dateline NBC” and CNN’s “American Morning.” These positions prepared her primetime with the Oprah Winfrey Show and her triumphant return to the “Mecca.”

When I asked Teri some years ago what gave her the gumption to take a job as a glorified receptionist when many of her peers had their own offices, I remember her saying rather matter-of-factly, “I never worry about what other people are doing.”

Colette Shelton took a similar route. The Fox Broadcasting Company Vice President of Brand Integration joined the company after working her way up to Vice President of Reality Programming at Lifetime Television. Neither Teri nor Colette commented for this piece, but Colette’s Q. & A. with The Georgetown Media and Entertainment Alliance offers some insight.

“When I graduated, I had a six-figure offer from a law firm which I turned down and begged my way into a job as a TV news reporter in Las Vegas that paid under $20,000 a year! My parents thought I was crazy but I knew I wanted to build my career in media and I learned so much in that job.”

Teri and Colette believe in themselves. Such self-assurance should be second nature to all of us, but in fact, is rare. To be sure, it is a bit daunting to realize that you’ve just invested (in some instances) hundreds of thousands of dollars to become a lawyer, but must now consider the possibility of living under a bridge in a box papered with Sallie Mae mailing envelops if Plan B does not pan out. It may, however, be well worth the risk.

Consider Allyson Tucker-Mitchell, who did something overachievers are not often willing to do. She quit law school during our first year. The Brown University graduate wasn’t having problems competing in law school, but she did question whether this was what she was meant to do. She made the decision to follow her dream and headed back to the lights on Broadway. Today she’s got Playbills and a fabulous life to show for it. Over the years, I’ve seen the dancer, who is married to the Tony Award-winning performer, Brian Stokes Mitchell, pictured with movie stars, New York doyennes, and President Barack Obama.

Boldness wasn’t reserved solely to those pursuing careers in entertainment…

Some of my classmates leveraged their legal experience to create career opportunities in politics, public policy, and even medicine. After completing law school, Kimberly Henderson decided to enter Georgetown’s medical school. She is now an Assistant Professor at Beth Israel Medical Center. Kim found her law degree to be pliable, using her legal knowledge to serve as a legislative assistant to a congressman and to handle morbidity and quality assurance issues in her residency program.

DeChane Dorsey is the AVP for Payment and Health Care Delivery Policy at AdvaMed and Adrian Miller is a senior policy analyst for Gov. Bill Ritter, Jr. Curtis Etherly has worked in DC’s City Hall and been appointed to serve on a state board. He even ran unsuccessfully for the city council. Curtis explained, “I worked in a large firm…I left after two years due to not feeling passionate about the work I was doing nor having a significant sense of job satisfaction. I took a 40% pay cut and went into government service…I wanted to work on issues and matters that impacted people and places that I cared about. I wanted daily and consistent opportunities to make the world around me better.”

As VP for Public Affairs & Communications at Coca-Cola Enterprises, Curtis gets to do just that. The perks aren’t bad either. Here he is discussing a little “something, something” at the 2010 NABOB conference.

I agree with Curtis when he says, “It may be cliche to say ‘think outside of the box’ but I stand by it.  Do not hesitate to consider nontraditional career paths for your law degree — it is indeed possible to marry your personal passions together with a rewarding career path.  Be imaginative and open to novel applications of your legal acumen.”

Boldness wasn’t reserved solely to those pursuing careers in entertainment or politics. After law school Erika Mobley, a Yale undergraduate, made the risky and counterintuitive decision to eschew a traditional legal job for a position at the Recording Industry Association of America. That job was followed by a move to the West Coast and more non-legal positions at Amazon.com, Palm, and Real Networks. She recently returned from Australia where she worked for two years, expanding Apple’s iTunes presence. Today she is an expert in global business strategy and marketing, leading business development and licensing for Apple’s App Store, which has her working with major properties, such as Sony, MTV, and Dreamworks.

Erika returned to Milton Academy, one of the top college preparatory boarding schools in the country, to deliver the commencement address. The advice she gave to students just starting out contained words we can live by at any phase in life.

#1:  Don’t buy into formulas too quickly or too easily.
#2: Don’t downplay your own experiences and don’t forget what you already know.
#3: Move out of your comfort zone. Be adaptable and open to paraphrase.