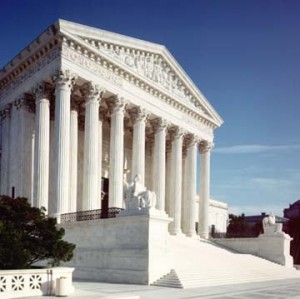 Justice Souter is ready to get back to his books and his beloved New Hampshire.  He has reportedly informed the White House that he will retire.  At the time of his appointment by Bush 41, he was viewed as a “home run for conservatives” by the likes of John E. Sununu, who apparently was not much of a scout.  Viewing the old photos of Souter, we’re surprised we’d never noticed the Justice’s penchant for pinstripes. WaPo

Souter was considered by some to be the most likely, because of his well-known disdain for the ways of Washington. The speculation has been fueled in recent weeks because Souter had not hired clerks for the court’s next term. That was tempered by the fact that Souter traditionally is the last justice to hire for the coming term.

When the court is not in session, Souter is back home in Weare, a small town west of Concord where he has a modest 200-year-old farmhouse on eight acres.

A friend who ran into him last summer in Concord said he was surprised by just how strongly Souter spoke about wanting to leave Washington. “He said, ‘If Obama wins, I’ll be the first one to retire,’ ” said the friend, who spoke on the condition of anonymity because Souter had not yet announced a retirement.