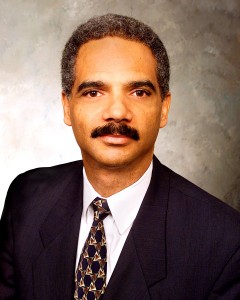 Due to “Snowmageddon” this year Black History Month came in March at the Justice Department.  Mr. Holder gave a shout out to the Spingarn Senior High School JROTC Color Guard and Howard University Gospel Choir (who no doubt rocked it) before ruminating on the distance this country has let to travel on the issue of race.

For well over two centuries now, we, as a people, have been striving to build a more perfect union – an America where the words of our Constitution can, finally, reach the full measure of their intent. The work of the Justice Department is, and always has been, critical to this pursuit. As a law student and as a young prosecutor in our Public Integrity Section, I dreamed of contributing to this Department. Today, as Attorney General, I have the honor and responsibility of leading it. I also have the privilege of serving with colleagues who share my commitment to this work. Like you, I have great faith in our justice system. In fact, I’d argue that it’s among the most praiseworthy aspects of our national character. But I also realize this hasn’t always been the case.

Despite the great progress we’ve seen in my lifetime, it wasn’t so long ago that African Americans were prevented from owning property, attaining home or business loans, and joining unions. The legal framework we celebrate today – the same system that abolished slavery, encouraged women’s suffrage and ended segregation – once served as a barrier for black families struggling to build wealth and for black children who sought an adequate education.

There was a time when this very Department undermined the rights and privileges it was established to preserve. There was a time when it was accepted, almost universally across our country, that the American principles of justice, liberty and equality did not have to be applied equally to blacks and whites, or to women and men. For much of the last century, our justice system did not do enough to help our nation fulfill its promise of equal opportunity. And, as a result, the doors of economic prosperity remained closed to too many Americans on the basis of their race.