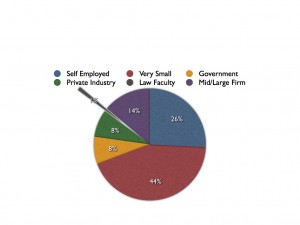 US News & World Reports released its law school rankings earlier this week, and OBABL would like to weigh in. We often hear that black perspective law students rely on US News when choosing which law school to attend. This is a HUGE mistake. Frankly, it’s a mistake for all students, but it is especially damning for future black lawyers. To begin with, many of the things that US News takes into account are anachronistic. What does it matter how many volumes are in the law school library when research is increasingly done online. A whopping 40% of the ranking score is based on the subjective measure of a law school’s reputation. Perhaps something could be gained from a reporting of the number of judges, general counsel, and biglaw partners hailing from particular law schools since it is reasonable to assume that these distinguished alumni would favor graduates of their law schools, but that’s NOT how the figure is calculated. US News takes the “opinion” of people from OTHER law schools. What does a Vermont Law School dean know about Mercer Law School in Macon, Ga? Probably, not much.

The biggest misconception lies in prospective law students’ belief that a direct correlation exists between a graduate’s law school rank and her first job’s salary and prestige. With few exceptions, this is not the case. Many T-14 graduates find themselves unemployed or in low-paying legal jobs following law school. There are few jobs more prestigious than a federal appeals court clerkship, and according to Law Clerk Addict, a graduate of the perennially fourth tier Southern University Law School clerked for a 5th Circuit judge last year. Only two employers are obsessed with law school rankings—the largest 250 (out of over 40,000) law firms and law school faculty, which, as you can see from OBABL’s pie chart, make up a very small fraction of legal jobs.

Here are the five things black prospective law students SHOULD consider when deciding on a law school.

1. The financial cost to you – This is the single most important factor to weigh before deciding on a law school. We’ve reported here on studies showing that minorities have more law school debt than their while peers. This is debt that can’t be extinguished in a bankruptcy and could call your bar into question, so take it seriously. Now how you should factor the cost will vary depending on where the money is coming from. If no law school is offering you a scholarship, the cost analysis is as simple as calculating the tuition and living expenses. Schools offering scholarships should be given added consideration because those institutions are showing you the love and are likely to look out for you more once you’re there. They are also betting on you to be successful there. Schools not offering you money are placing their bets elsewhere.

2. Size and influence of the law school’s black alumni – Identity politics are alive and well in ever corner of this nation. People tend to gravitate and bond with people they identify with, which is more often than not people who look like them. Chances are your most effective networking will be with BLSA alumni. If that network is small or nonexistent, you’re on your own, kid.

4. Black faculty to black law student ratio – We hate to harp on this identify politics thing, but it’s real, people. Law students need faculty for guidance, as well as, job leads, research advice, letters of recommendation, and campus fellowships. Black faculty members do the best they can to help everyone who needs it, but there are a finite number of waking hours in a day, and with teaching, publishing, and committee commitments, they are often over extended. If in a crunch something has to give, that something will likely be you.

5. Graduate employment rate of black students – this factor would’ve been higher on our list if there was any real way to verify this figure. As we stated earlier, the number reported are a bit unreliable. We do suggest getting in touch with the BLSA chapters at schools you’re considering. They will have a general sense of how the job market is shaking out for their community. Besides, if you’ve followed the advice laid out in 1 thru 4, you’re already ahead of the game.