Georgetown Law’s reunion weekend concluded with a gathering of BLSA alumni at the finely appointed Eric E. Hotung International Law Center Building. There the law school’s newly appointed Executive Vice President and Dean, William Michael Treanor greeted us. In addition to praising Georgetown Law’s faculty, administrators and students, Dean Treanor cited Georgetown’s commitment to “justice, access and equality,” as his reason for wanted to lead the law school. In doing so, he noted the school’s hiring in 1874 of Father Patrick Francis Healy as the first black president of a major university.

In attendance were several of our distinguished faculty, including, Emma Jordan, Chris Brummer, and Elizabeth Patterson. Dean Patterson was accompanied by her husband, Jerome Patterson, who we mentioned in a previous post was a founder of Georgetown’s BLSA chapter. Tricia Parks Butler L’87 gave a heartfelt tribute to Dean Everett Bellamy. (Though he recently retired, it was quite clear Dean Bellamy’s influence and impact on Georgetown Law students continues). 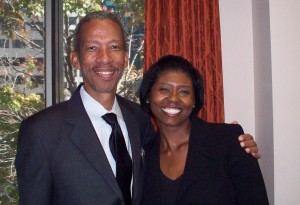 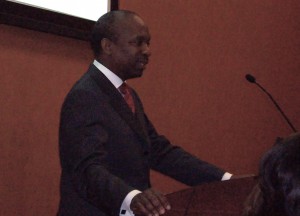 Our keynote speaker was Michael Jones, Esq. L’85, a partner at Kirkland and Ellis and this year’s recipient of Georgetown’s prestigious Paul R. Dean Alumni Award.

Mr. Jones was candid in the telling of his life story, which began in a public hospital in Shreveport, Louisiana. He spoke of his first job picking cotton and his father’s third grade education. He jokingly referred to his mom as the IRS—Income Robbing Sister. On the subject of food stamps he stated emphatically, “Money can’t buy happiness, but I happen to know neither can food stamps.”

The crowd enjoyed hearing this distinguished gentleman speak whimsically of the things he loved in his youth—Michael Jackson, The Jeffersons, and OJ Simpson. His life’s timeline was illustrated by covers of Jet and Ebony magazines (undoubtedly another of his youthful pleasures).

Mr. Jones was on the debate team in high school and noted that in 1978 the national debate issue was whether or not the U.S. should have a national healthcare system. During that same year, the Supreme Court issued the Bakke decision, which impacted Affirmative Action.

1984 was an especially momentous year for Mr. Jones and the nation. An unlikely friendship with his white research and writing instructor led to his clerkship with Judge Elbert Tuttle, who sat on the U.S. Court of Appeals for the Fifth Circuit. That same year, Vanessa Williams became the first black Miss America then lost her crown in a scandal. Jesse Jackson wowed the crowd at the Democratic National Convention, and Black America debated whether we’d ever have a black president. South Africa was embroiled in the Apartheid Riots, which led most to doubt that apartheid could end peaceably. The message here: Life can surprise you.

One of Mr. Jones’ themes was how important it was for us to do our part. To highlight this, he recounted the email a black Georgetown alum had sent deploring the paltry endowment of our African American scholarship endowment. The alum chided the email recipients, “Y’all got to do something!” Mr. Jones took up the challenge and today endows a scholarship at Georgetown.

There is still work left to do, he assured us, ending with his friend’s refrain. “Now, y’all got to do something.”